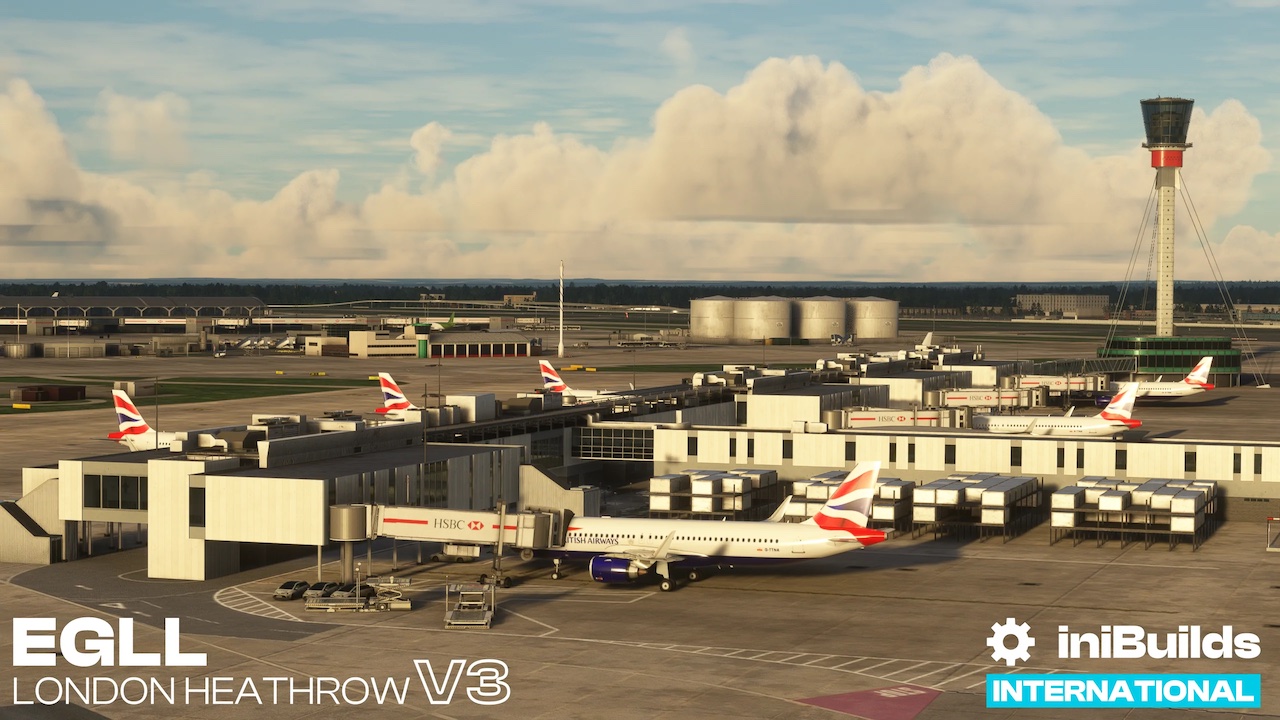 Info
Warning: This airport conflicts with Asobo Studio EGLL airport, only use one of the two (iniBuilds recommended).

Note: To use VDGS (Visual Docking Guidance System), follow the instructions on vdgs.nool.ee.

Note: To enable SD textures instead of HD textures, rename the following folders (you can delete the unused one in order to save space):

Note: To remove various objects on the airport, go to “inibuilds-airport-egll-heathrow\scenery\airport-egll-london\egll-scene” and rename the following files:

Description
iniScene’s largest airport yet: Heathrow International (EGLL) for Microsoft Flight Simulator. As the major beating heart of London’s aviation scene, and the third busiest airport in the world, it’s an essential airport for any seasoned flight simmer.

The airport is known for being the home of the UK’s flag carrier British Airways and the primary operating base of Virgin Atlantic. Being used by over 80 airlines and with flights to over 180 destinations, it’s safe to say there are a plethora of routes to keep you amused.

Heathrow’s impressive area covers over 12 sq/km of area in the simulator. To compliment that, it features custom taxi signs, realistic terminals, custom ground service equipment and plenty of points of interest and surrounding buildings to provide a redefined level of realism plus many more features.

• 80+ custom modelled and textured POIs and buildings in and out of the airport boundary with accurate PBR texturing
• 10,000+ custom iniScene car models scattered throughout parking lots outside of the airport boundary
• Aggressive performance saving methods featuring LOD model optimization (Level of Detail) and meticulous optimization where possible throughout the scenery
• 5 accurately-placed jetway variations with realistic PBR texturing and animations
• Hand-made ground polygons featuring custom decals, dirt, taxi lines and ground markings
• Over 430 custom made and hand placed taxi signs dotted throughout the airfield as in the real world
• Main airport landsides with ground markings and lighting faithfully re-created
• British Airways Concorde G-BOAB faithfully recreated and on-display before runway 27L
• Over 2,500 individually placed accurately colour toned airport lights scattered around the terminals
• Accurate logos and real-world decals scattered throughout the airport to promote a true to life feeling
• Custom-created, accurate and known landside points of interest such as the landmark Emirates A380 and Turkish Airlines roundabouts
• Hand-corrected, colour accurate ortho imagery
• Hand-placed bespoke ground service equipment at each gate featuring over 2,000+ containers, 2,000+ cargo dollies and a plethora of various static equipment
• Animated points of interest including radio towers and construction cranes