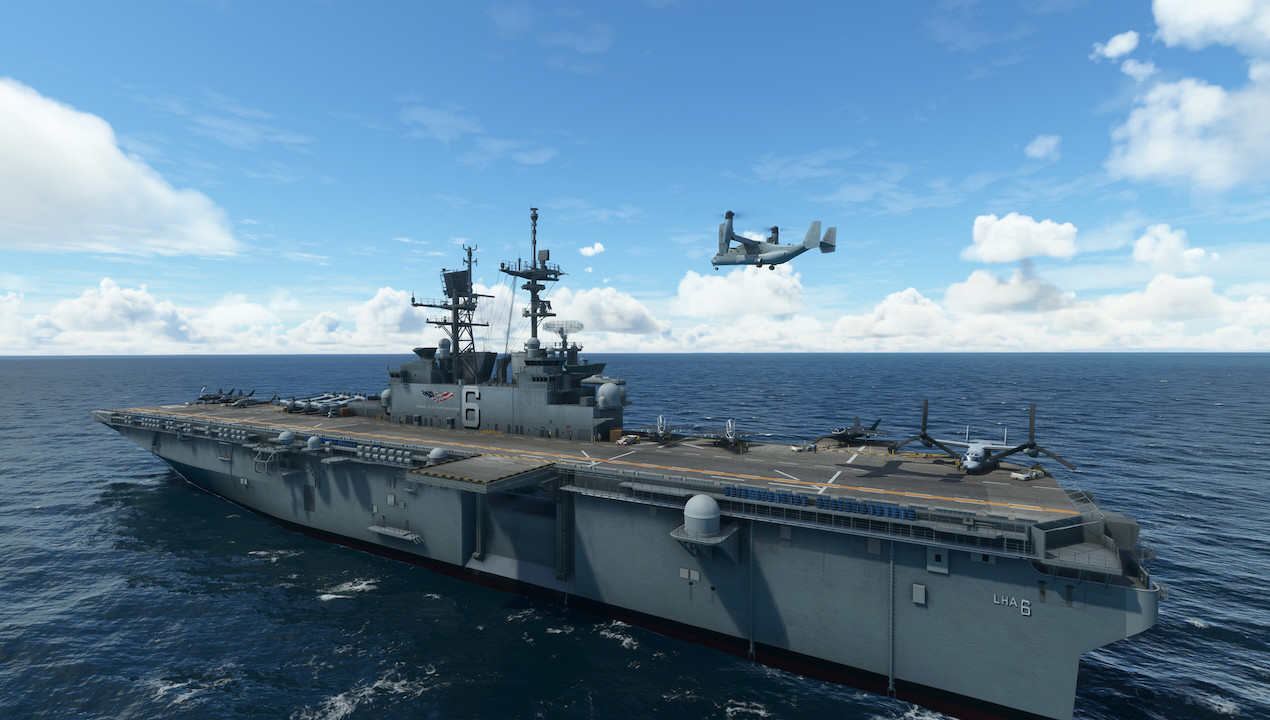 Changelog
v1.0.1:
– Fixes related to SU11 and LODs
– Repositioned submarine (Hawaii Location) due to conflict with other addons

Description
An Amphibious Ready Group of the United States Navy consists of a naval element – group of Warships, and a landing force – fleet of aircraft. Together, these elements and supporting units are trained, organized and equipped to perform amphibious operations, such as offensive coastal landings, but have been used in the past for humanitarian, MedVac and transport missions.

Worldwide, there are normally at least three ARGs deployed at all times, typically one in the Mediterranean Sea, and two in the Western Pacific. Under a slightly different configuration, which may include cruisers, destroyers and submarines, the Amphibious Ready Group then becomes an Expeditionary Strike Group.

All ships included in this package are static – otherwise, spawning on the ships, landing challenges and “Bush Trip” missions wouldn’t be possible. However, we do have plans to add moving ships in the future as well. All locations of the USS America are spawnable, and feature both aa “Runway” (Ready to Fly) as well as a “Parking” (Cold and Dark Start) position. All other ships feature Hard Decks, which can be landed on, but are not spawnable. All ships are easily identifiable on the World Map with POIs.

• Start your flights at the deck of USS America from any of the 16 locations around the globe.
• Simulate Amphibious Deployments, Marine Expeditionary Missions and Carrier Onboard Deliveries to and from USS America, USS San Antonio and USS Lewis B. Puller
• Locate, hover and deliver supplies to USS Virginia submarine on Special Operations with the Miltech Simulations MV-22B Osprey.
• Simulate MedVacs to the USNS Mercy
• Realistic carrier environment: Crew, vehicles, animated radars, static aircraft.
• Fully compatible with MSFS Multiplayer.
• We will add any location upon request
• Primarily developed as a companion of Miltech Simulations MV-22B Osprey, but compatible with any aircraft (see notes).

Locations: All 16 Locations are centered around the LHA-6 Carrier, and are identified by ICAO Codes:

All other ships can be identified with POI points. The complete list of locations, with coordinates is included in the manual.

• It is required to turn off Crash Detection to use this Addon
• Miltech Simulations MV-22B Not Included. Owning a license of the aircraft is not required, but highly recommended. Some future features may only be available for customers of the MV-22B.
• All ships are static. Moving ships will be added in future updates.
• LHA Unicom Frequency: 121.00
• This product does not accurately represent real-life events, procedures, or missions. It is for entertainment and educational purposes only.