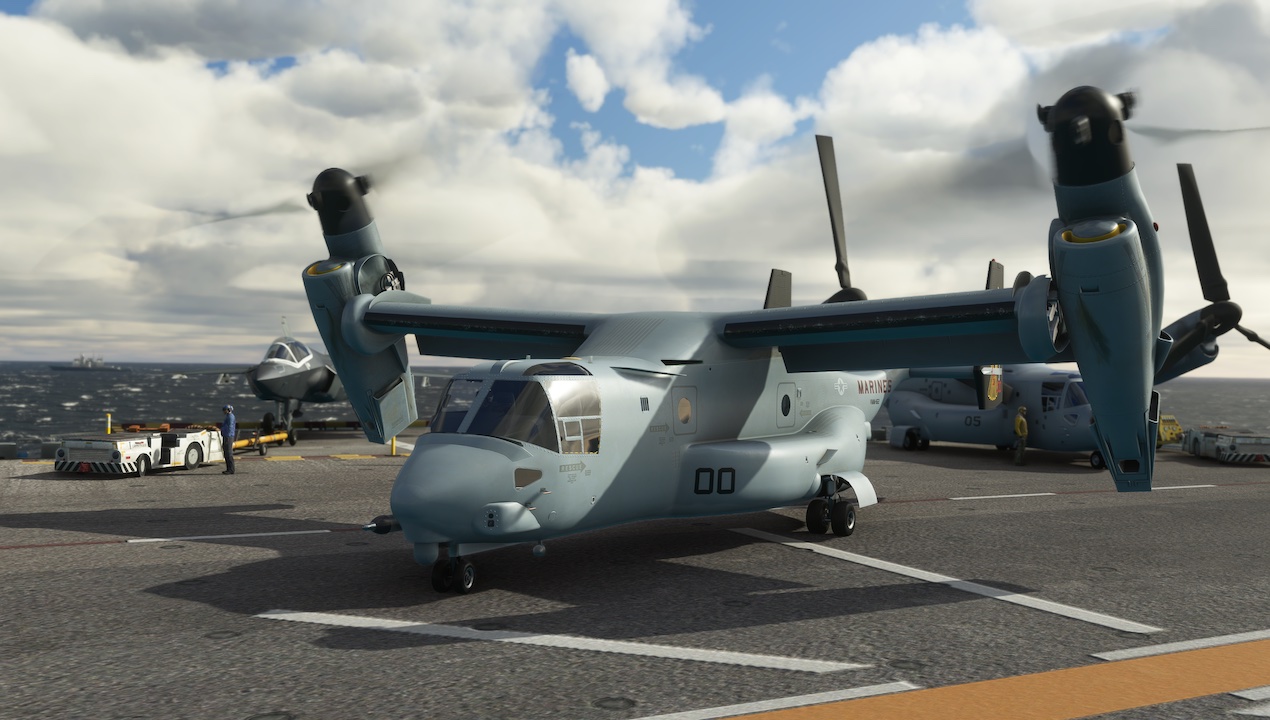 Description
The MV-22B Osprey is a tiltrotor, VSTOL (Vertical/short takeoff and landing), multi-mission aircraft, developed to fill multi-service combat operational requirements. The MV-22B replaced Marine Corps assault helicopters in the medium lift category (CH-46E and CH-53D), contributing to the dominant maneuver of the Marine landing force, as well as supporting focused logistics in the days following commencement of an amphibious operation.

The V-22B has other variants, such as the CV-22B, developed for the US Air Force. Other variants for the Royal Navy, Anti-submarine Warfare and Search and Rescue have been proposed. The aircraft is manned by a pilot, copilot, and enlisted aircrew appropriate for the specific service and type of mission being flown. The V-22 is optimized to transport troops (i.e., 24 combat-equipped Marines, or 10,000 pounds of external cargo) to austere landing sites from aviation capable amphibious ships and expeditionary forward operating bases ashore. The V-22 would be capable of flying over 2,100 nautical miles with one aerial refueling, giving the Services the advantage of a Vertical/Short Takeoff and Landing aircraft that can rapidly self-deploy to any location in the world.

The V-22 is currently operated by the United States Marine Corps (MV-22B), United States Navy (CMV22B), United States Air Force (CV-22B) and Japan Self-Defense Forces (MV-22B). Israel, India and Indonesia have considered acquiring the aircraft for their own military operations. All Osprey variants feature slightly different fuel capacities and configurations, but the design of the aircraft and systems does not change.

• Developed in partnership with talented aircraft developer Maryadi
• Most Detailed and Comprehensive representation of the MV-22B Osprey ever created for a consumer Flight Simulator
• Accurate external model, as well as Internal cockpit model, based on the aircraft flight manual and references
• Togglable automatic operation of Doors and Ramp based on the flight condition
• Authentic interior and exterior Night Lighting, including Osprey’s iconic Blade Tip lights
• Custom Sounds
• Hand-crafted Liveries included

• Comprehensive simulation of the aircraft instrument and systems. All instruments have been custom coded to match the real counterpart
• Realistic manual operation of engine nacelles based on airspeed, as per the real-life counterpart
• Full Simulation of BFWS (Blade Fold and Wing Stow) Procedures
• Accurate simulation of Auto-Hover capabilities, Auto-Flaps and custom-coded Autopilot

• Custom VTOL/STOL Flight Dynamics, including realistic behavior of the aircraft handling during movement of the engine nacelles
• Fully simulated Vortex Ring State: Dangerous aerodynamic stall condition that results in an uncontrollable descent of the aircraft
• Accurate simulation of the gearing system connecting both proprotors, allowing for 1 engine operations at reduced performance
• Engine overstress limitations as per the real aircraft – engines cannot sustain full throttle for long periods of time

• This product is still in active development. Please report any bugs you find and they will be addressed in future updates
• Nacelles are operated using INCREASE COWL FLAP 4 (Nacelles up) and DECREASE COWL FLAP 4 (Nacelles down). You must map these two commands to two buttons/keys in your joystick or keyboard
• MSFS Assistance Settings must be set to “True to Life” and flight model to “Modern”
• Vortex Ring State and Engine Limitations can be deactivated through the CDU/ACFT Init/MENU 3/Flight Reality
• Do not pause the simulator if nacelles are at a position different from Zero Degrees
• Autopilot works best in Airplane mode (nacelles at zero degrees)
• Only the MV-22B Variant is included. Other Osprey Variants have not been modeled due to a lack of access to variant-specific documentation